Here’s a link to a clip from the band’s Good Day LA (Fox) appearance last week. 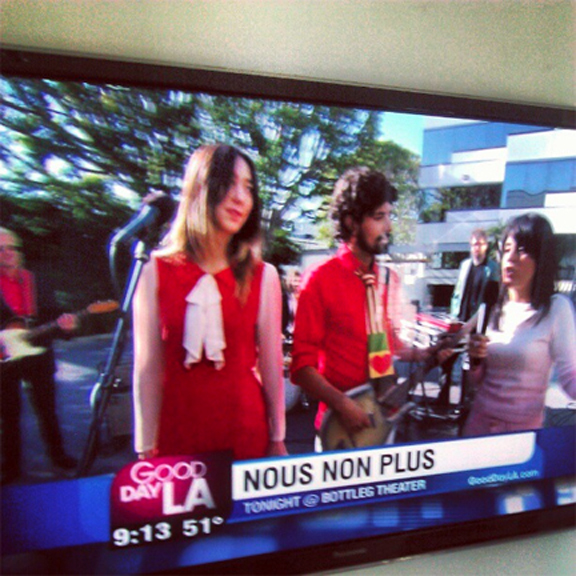 After their triumphant return to the icy, frozen tundra that was New York City in mid-January, Nous Non Plus is happily preparing to shed their winter clothing for the journey to sunnier shores. 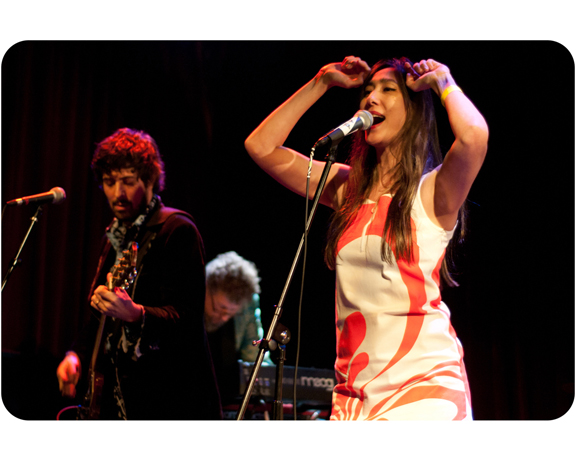 Why we’re so famous in Slovenia… 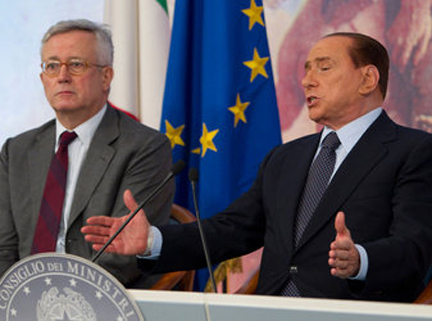 When I saw Italian prime minister Berlusconi’s photo on the (virtual) cover of The New York Times this morning (above), I couldn’t help myself from inserting my own caption: « Ma… La Merkel mi sta facendo un culo così! » Translation: « Merkel is really tearing me a new one! » (Note the gesture whereby Berlusconi illustrates the size of the new ass[hole] that Merkel is tearing for him.)

Surely I am not the only Italophone who fell victim to this overwhelming urge.

As we Americans awake from the stupor of our congressional budgetary crisis only to find that the debt crisis is about to topple Western Civilization as we know it (first Greece, now Italy, etc.), there is no small dose of irony in the fact that German prime minister Angela Merkel and her husband are enjoying their Alpine vacation in German speaking Italy, in the village of Solda to be precise.

Yesterday, in any event, it came as no surprise to me when my blogging colleague J.C. brought to my attention (on the Twitter) the news that « took advantage of a government press conference last night to push his own shares. He said if he had savings he’d fill his boots with Mediaset, which was now ‘utterly undervalued' » (via The Guardian).

For the best blog coverage of Italy’s emerging and expanding debt crisis, I’ll be following Avvinare, who use to work as a financial reporter in Milan. 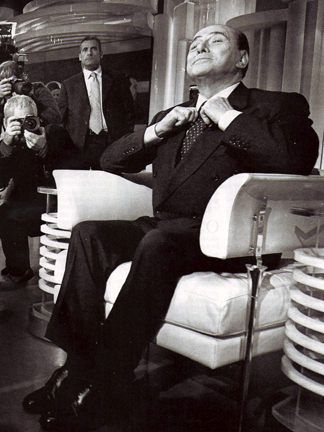 I’ve never met Berlusconi, although I did breath the same air as he when I was working as an interpreter at the United Nations and was called into a meeting between him and Kofi Anan.

In all fairness to Berlusconi (evviva la par condicio [the Italian fairness doctrine]!), he did get a bad rap in a recent New Yorker profile (although I did love the photo from the piece). As well intentioned as the young author, Ariel Levy, may have been, she probably should have brushed up on her Italian before filing her article (where are the cocaine-snorting fact checkers when you need them, Jay?).

She erroneously found irony in the fact that the Italian press refers to Berlusconi as il presidente. In fact, while we call him the prime minister, he is the president of the council (presidente del consiglio) that governs the two houses of the Italian parliament.

She also erroneously found hyperbole in the fact that the Italian press calls him il cavaliere (the knight). In fact, Berlusconi is a knight in the Italian Order of Merit for Labour. And because he is Italy’s richest man, he is — by antonomasia — the knight, i.e., the leading knight in the order.

Otherwise, I agree 100% with everything Ms. Levy said in her piece (and recommend it to you).

My band Nous Non Plus has recorded I song I wrote about Berlusconi. It’s called « Bunga Bunga » and will appear on our forthcoming album Freudian Slip.

I can’t play it for you yet but I can preview a line:

All over the world, on fait le Bunga Bunga.

Post script: check out this excellent article in the Atlantic about the origins of the expression Bunga Bunga. Philology at its best (and its funniest)!