← One of our fav fan vids
New presse page is live! → 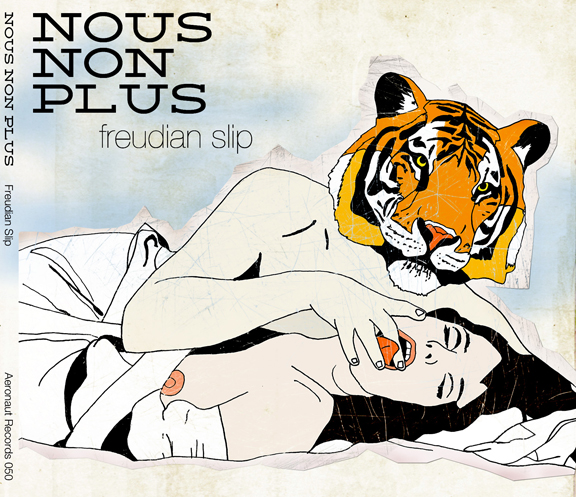 Freudian Slip, the third studio album from the elegant, sexy, chic, and multi-lingual Nous Non Plus, features a sweet mélange of indie-pop/rock-synth-laden and hook-filled songs sung mostly in French. Led by the sultry and brazen Céline Dijon (who was raised in Paris and is of Swiss-German/Chinese descent), Nous Non Plus offers French music, sans pretension.

Nous Non Plus (NN+) rose from the ashes of the NYC faux-French band Les Sans Culottes. In 2005, when several members of Les Sans Culottes staged a coup d’état — a grand French tradition, after all — what followed was a truly bizarre encounter in Federal Court involving their former band mates, lawyers, a blind judge, and a seeing-eye dog. Ultimately, it was settled: Nous Non Plus (literally translated to “us no more”) was born.

Though the band members now all live in different cities from Paris to Los Angeles, they reconvened in Austin, TX to record the bulk of Freudian Slip. Working with legendary songwriter/guitarist David Garza and Parisian drum programmer Julien Galner (of Château Marmont), the band mixed programmed loops with live drums, and moog synths with layered vocal harmonies to create their textured pop sound.

The title track — the arpeggiated synth driven “Freudian Slip” — is a musical nod to their personal icon, Serge Gainsbourg and tells the story of a patient falling pray to the sexual suggestions of her psychiatrist.

NN+’s eponymous first album shot to the top 10 of the CMJ charts and their sophomore effort Ménagerie also made a splash on college radio. Songs from their albums have been featured on Gossip Girl and in various commercials.

The band is renowned for their highly charged, sweat-inducing live shows. They’ve played in Paris, La Rochelle, London, Ljubljana (Slovenia), Canada, and across the US.