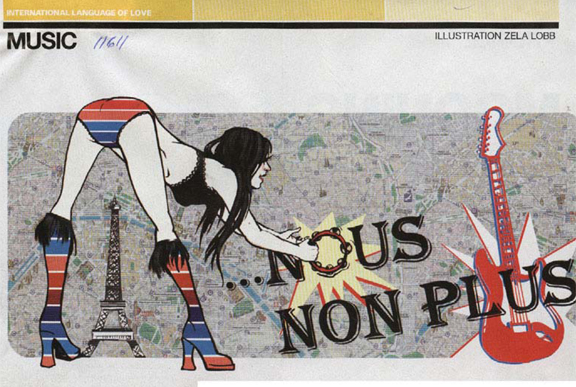 Slate.com
October 24, 2005
Jean-Luc’s rendition of the events that led to the formation of …Nous Non Plus

Jean-Luc Retard has been many things to many people. Today, he loves mostly wine, women and song—not necessarily in that order

Jean-Luc occasionally poses as an American writer, and as a Swedish-French air guitarist. He is also not getting enough sleep.

Retard is a pisces and enjoys sushi. 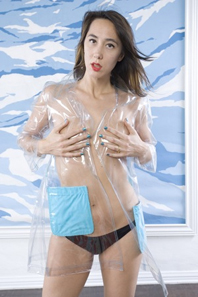 Céline Dijon’s life was not always so rosy as you are imagining.

Céline’s birth at the Hôpital Américain de Paris (which, ironically, is not IN Paris, but in the suburbs) almost entirely drained the family’s resources, as no one had informed them that it was no longer free to expats since the 1920s.

As a result, Céline Dijon was not raised on the right bank. NO. The poor thing is une enfant du sixième. So Bobo!

Impatient to live the perfect life she had envisioned for herself, she auditioned to be a Crazy Horse dancer at the tender age of 14. Tragedy. Her breasts were the right shape, but despite having started to avidly smoke by the age of 12, this did not prove early enough to stunt her growth: at 1m76, she was already too tall for Le Crazy. She quit smoking.

Dejected, she accepted an offer to sing as back-up for Lova Moor’s pop outfit (still in the hopes of getting into Le Crazy). Quickly realizing this was leading absolutely nowhere, she saved all her centimes to cross the Atlantique, where she had heard something about intriguing self-made men. After a little turbulence, narrow seats and NO MOVIE (merde alors, putain de Concorde!) she landed in Queens, et le reste, mes amis, c’est de l’Histoire…

The Loli video from Ménagerie