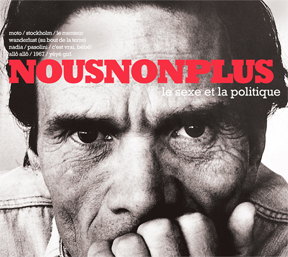 In one of the last interviews that Pasolini gave before his assassination by a prostitute at the Roman seaside (Ostia), he told a French journalist in Cannes: « I believe that it is one’s right to shock people; that being shocked is a pleasure; and that those who refuse the pleasure of being shocked are moralists, so-called ‘moralists.' »

The quote spoke to the band on many levels and in many ways represents the arc of Nous Non Plus’ raison d’être.

The occasion of the interview was the debut of Pasolini’s 1975 film Salò o le 120 giornata di Sodoma (Salò or the 120 Days of Sodom), his controversial adaptation of the Marquis de Sade’s famous work. Pasolini would be found dead on the beach outside of Rome six months later.

The quote can be heard — in his own voice and translated into French — in lead singer Céline Dijon’s homage to Pasolini, Italy’s towering intellectual celebrity of the 1960s and 70s, in the song devoted to his life as an artist (entitled simply « Pasolini »).

The track reflects the band’s recent fascination with electronica and computer-generated music, a genre that appears in Jean-Luc Retard’s coup de maître, a soundscape entitled « Le menteur » (« The Liar »). In this stirring piece, Retard juxtaposes primitive and repetitive drum programming with his silky Fender Stratocaster and Céline’s luscious voice — the only « real » instruments in the recording.

But the group’s flirtation with computer-generated music on this effort is counterbalanced by its love for rockers like « Moto » (a song about a girl obsessed with a man’s motorcycle) and « Stockholm » (a foray into sadomasochism and role-play). And true to its roots, Nous Non Plus also delivers a suite of classic 1960s-inspired tracks, like the playful duet featuring Dijon and Retard, « C’est vrai, bébé! », and the stunning performance rendered by Dijon on « Nadia », a song about a Russian spy and her unrequited lover Vladimir.

The red threads that connect the dots of this eclectic collection of songs are sex and politics. As Nous Non Plus reminds us with this new album, passion and power are what make the world go round.